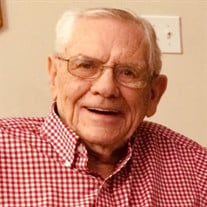 William S. McCurry, Jr., age 95, died a peaceful death Sunday, January 26, 2020, in Birmingham, Alabama. He was born in Shelby, North Carolina on May 15, 1924. He was the second of eight children born of William and Olney Champion McCurry. He was a graduate of Shelby, North Carolina High School, the University of South Carolina and George Washington University College of Law. In addition to his parents, he was preceded in death by a daughter, Cynthia Hyde, of New Orleans, Louisiana, his brothers Clifford of Shelby and Robert Bruce of Shelby, and sisters Catherine Standridge Mizell and Elizabeth Debrew of Shelby. He is survived by his wife of 74 years, Marcelle Allen McCurry of Birmingham, Alabama, daughters Cathy Stewart (Tom) of Birmingham and Pamela McCurry of Matteson, Illinois, son-in-law Don Hyde of New Orleans, a brother Donald McCurry (Kathryn) of Earl, North Carolina, two sisters, Jo Hester of Shelby and Jane Harris of Charlotte, North Carolina, three grandchildren, Chis Stewart (Suzanne) of Charleston, South Carolina, Leslie Cerenzia (Joe) of Charleston, and Timothy Hyde of New Orleans. He also is survived by three great grandchildren, Isabelle Stewart, Carson Cerenzia and Haley Cerenzia, all of Charleston, as well as numerous nieces and nephews. Bill was a member of the Greatest Generation, serving his country in the U.S. Army during World War Two. He was a three-year veteran, having served overseas in England, North Africa, Sicily, Italy, France and Germany. He participated in seven campaigns from North Africa to Central Europe. After the war, he worked as a Patent Attorney for the Borg Warner Corporation in Chicago, Illinois. Upon his retirement in 1981, he and Marcie moved from Olympia Fields, Illinois to Savannah, Georgia, where they enjoyed golf, fishing, bridge and hosting family and friends in their home on Skidaway Island. Bill had a strong faith which led to service in various churches all of his life. As a child he attended Second Baptist Church in Shelby, where he accepted Christ as his savior in 1935. Later, he was a member of Southside Baptist Church in Savannah and Skidaway Island Presbyterian Church, where he was famous for cooking the men’s breakfasts. His grits were always a big hit. He served all of these churches as a Deacon and an Elder and on various committees. He loved to sing and spend time with his family. Bill was a good man and was loved by all. He had a kind heart and a gentle spirit. He will be missed. He will be interred at Cleveland Memorial Park in Shelby, North Carolina, with a service at 2:00 p.m. on February 1, 2020 at Clay Barnette Funeral Home in Shelby. Visitation will be from 1:00 p.m. until 2:00 p.m. Memorials may be made to The American Cancer Society and/or The American Heart Association.

William S. McCurry, Jr., age 95, died a peaceful death Sunday, January 26, 2020, in Birmingham, Alabama. He was born in Shelby, North Carolina on May 15, 1924. He was the second of eight children born of William and Olney Champion McCurry. He... View Obituary & Service Information

The family of William McCurry created this Life Tributes page to make it easy to share your memories.

Send flowers to the McCurry family.