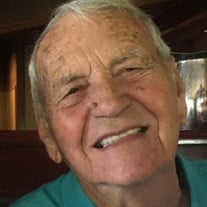 SHELBY-Tommy Neal, 91, left this world on December 14, 2021, with plans to start his next adventure. He talked longingly of seeing his parents again. Born February 8, 1930, Tommy lost his mother at the age of two and was adopted by Hugh and Margaret Neal. He grew up in the Patterson Springs community, later owning Number Three Egg Producers and Cleveland Poultry Farms. He was a force in the local poultry industry, receiving the 1997 Cleveland County Poultry Hall of Fame Award. His first chicken house was built in 1955; by the 1980's Tommy had over one million birds. He retired in 1994. He also owned Tommy & Roy's City Cafe for a number of years with his dear friend, Roy Putnam. Tommy lost his beloved wife of 49 years, Leona Smith Neal, in 2000. He was blessed to find love again with his wife of 20 years, Rebecca Bridges Neal. Tommy was one of those people who gave willingly to his church and his community and will be remembered for that generosity. He was member of Sharon United Methodist Church for more than 60 years. Tommy had a quiet, abiding faith; he loved music, frequently asking his daughter, Christine, to play the piano for him in his last days; he seldom met a slot machine he couldn't cajole into paying off; and he adored a good cigar, golf, spending time at the beach, having beautiful lawn, playing the stock market and a good card game in equal measure. He never stopped missing his beloved dogs, Gretchen and Dinah. We can assume they were in his Heavenly welcoming committee. In addition to Leona, Tommy was preceded in death by his parents; his son, Mike Neal; and two brothers and a sister. Tommy leaves behind his beloved wife, Becky; two daughters, Patty Neal Dorian and Christine Neal Cline; a step-daughter, Kim Champion; three sons-in-law, Eino Lindfors, Louis Schlessinger, and Kali Champion; a sister, Stevie Carpenter; a grandson, Andrew Fleming; two granddaughters, Kacy Forbes and Addison Champion; and a number of nieces and nephews. He also leaves behind the dearest friends imaginable in the Hull family. The family wishes to thank Helping Hands and Hospice for their support in his final days. Tommy will be grieved and remembered. Funeral Services will be held 2pm, Saturday, December 18, 2021, at Sharon United Methodist Church with the Rev. McKenzie Gary Officiating. The Family will receive friends one hour prior to the service in the Church. Burial will follow in the Church cemetery. Memorials may be made to the Neal Senior Center, 100 T. R. Harris Drive, Shelby, NC 28150. In observance of Covid protocols, masks will be required.

SHELBY-Tommy Neal, 91, left this world on December 14, 2021, with plans to start his next adventure. He talked longingly of seeing his parents again. Born February 8, 1930, Tommy lost his mother at the age of two and was adopted by Hugh and... View Obituary & Service Information

The family of Tommy Neal created this Life Tributes page to make it easy to share your memories.

Send flowers to the Neal family.