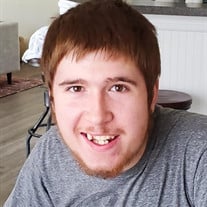 Samuel “Sammy” Roush was an 18-year-old boy with a feisty yet loving spirit. He was born on August 19, 2002 in Tampa, Florida and left this world on July 30, 2021 in Orange Park, FL due to aspiration and lack of oxygen to his brain after undergoing a routine wisdom tooth removal procedure. Sammy had autism and his greatest joys in life were spending time with his family, listening to all kinds of music and watching movies and game shows. Sammy was a twin and loved his brother Zachary very much. Although he could not tell us in words, in actions he showed us he would have chosen a career as a game or talk show announcer. He would often declare with gusto “I’m your host, Sammy Roush with special guest Zachary Roush!” He was inexplicably passionate about game shows and Wheel of Fortune in particular, and would sometimes communicate if he was unhappy by yelling “Oh no, bankrupt!” While he couldn’t speak in full sentences and many times used echolalia to communicate, he was able to convey his joy or disdain using phrases he culled from game shows and movies. Sammy preferred to be home and not go out-and-about very often, but he did have two favorite places—Taco Bell and Disney World. Disney World was a magical place for him where he was always happy and smiling, and a place he always mentioned when he was feeling happy and wanted others to know it. Sammy loved Christmas and Christmas music, and would talk about Christmas and break into singing Christmas songs all year round. Although Sammy couldn’t communicate the way the rest of us do, there were breakthrough moments where his voice sounded like the rest of us. One of those times is when he would sing to a particular song called “Nothing in My Way” by the band Keane with his mom’s cd in the car. He would get very excited and say “Keane song, Mom!” and sing to the music and his voice was strong and clear and he sang along to the song beautifully. His mother would be so happy and proud and everything felt right and calm in those moments. Sammy is survived by his mother, Amy, his father, Eric, and his twin brother, Zachary, who all pray that Sammy is at peace, whole and restored and is singing in Heaven, now truly everything beautiful he was meant to be on Earth. In passing, Sammy became an organ donor. For all of the difficulties and struggles he faced in life, and for all the things he may never have been able to do, he has become a hero to six families who received the gift of his heart, lungs, liver, kidneys and pancreas. We pray that his gift of organ donation helps spare all of the recipients and their families the sorrow we feel in his passing, and that his spirit lives on through them. In lieu of flowers, please consider a donation to the Autism Science Foundation. The organization works to fund research and successful treatments for individuals living with autism. A Celebration of Life memorial service will be held at Noon, Saturday, September 18, 2021 at Hardage-Giddens Holly Hill Funeral Home, 3601 Old Jennings Road, Middleburg, FL 32068. All those who knew and loved Sammy at any time during his life are most welcome to attend.https://donatenow.networkforgood.org/autismsciencefoundation?code=ASF+Website Aquamation services are provided by Clay-Barnette Funeral Home in Shelby, NC.

The family of Sammy Roush created this Life Tributes page to make it easy to share your memories.

Samuel “Sammy” Roush was an 18-year-old boy with a feisty yet...

Send flowers to the Roush family.