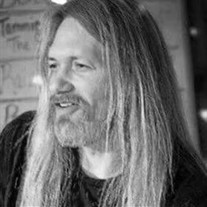 SHELBY-Richard “Ric” DeLozier, 58, died Tuesday, December 31, 2019, at his home. A native of Cleveland County, he is the son of Mary Jones DeLozier of Shelby, and the late Harold “Bud” Delozier. Ric was a loving companion, father, son, brother, uncle, and friend but most of all he was a wonderful musician. From the time he was a young boy it was very evident that Ric had a passion for music. The moment he picked up his first guitar at 4 years old his life of music began. Ric taught himself to play guitar and also to read music. Music was never a competition to Ric but a way of expression. From his head and heart to his hands he poured everything into his music. He wrote several pieces, released numerous albums and songs, played with many bands and also shared his passion by teaching others to play. Through the years his practice and passion allowed him to perform for many loyal followers whom he loved dearly. Ric will always be remembered not only for his music but also for being such a genuine man. He was never afraid to be himself and he had a knack for making other people feel comfortable just being themselves. Some referred to him as a guitar hero, however, for Ric he was just living his dream. A dream he truly loved and lived until the end. In addition to his mother, he is survived by the love of his life, Debbie Keevill, of the home; son, Rick DeLozier and wife Lexy of Shelby; sister, Cindy Goforth and husband Jamie of Forest City; brother, Phil DeLozier and wife Alice of Shelby; and grandchildren, Talon and Zeke DeLozier. A memorial service will be held 3:00 pm, Sunday, January 5, 2020, at Pleasant Ridge Baptist Church, with the Rev. Dr. J. Eric Davis officiating. The family will receive friends one hour prior to the service, in the church. Memorials may be made to American Cancer Society, 1901 Brunswick Ave. #100, Charlotte, NC 28207. Arrangements are entrusted to Clay-Barnette Funeral Home & Aquamation Center www.claybarnette.com

The family of Ric Delozier created this Life Tributes page to make it easy to share your memories.

Send flowers to the Delozier family.