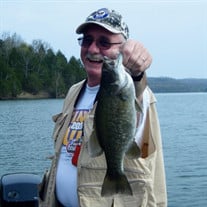 Michael William Skinner of Shelby entered the presence of his Savior on July 11, 2020, at the age of 61 after a short, but courageous, fight with Glioblastoma. Mike was born in Athens, Ohio, on April 7, 1959, to Samuel and Patricia Skinner. After graduation from Athens High School in 1977, he entered the United States Navy, where he served as a fire control technician using radar on the USS William V. Pratt, and attained the rank of Petty Officer First Class. After serving his country, he made his home in central Ohio, where he spent many years working with HVAC controls. He and Mary relocated to North Carolina in 2014. Outside of his family, his greatest joys were found on early morning hunting trips and in the hours spent fishing on the lake, especially with his favorite fishing partner, his dad. He deeply loved his church family and his God. On fall Saturdays, he could be found cheering for his favorite team, the Ohio State Buckeyes. Mike is survived by his wife of 38 years, Mary Wirtz Skinner of Shelby, NC; his two daughters, Holly (Andrew) Minion of Minneapolis, MN, and Tammy (Sean) Golden of Columbus, OH; and by his grandsons, Ryan and Marcus Minion, who lit up his world. He is also survived by his parents, Samuel and Patricia Skinner; three sisters, Sheryl (Bill) Leuschel, Lori (Bill) Squibb, and Julie (Colin) Davie; one brother, Daniel (Renee) Skinner; his brothers- and sisters-in-law: Terri Wirtz, Mark Wirtz, Liz (Dan) Supernand, Tim (Cindy) Wirtz, and Dan Wirtz; as well as 12 nieces and five nephews. He is preceded in death by his grandparents, John and Helen Jackson, William Skinner, and Louise Skinner Beougher, and his brother-in-law, Joseph Wirtz. A graveside service officiated by Pastor Jim Ogle will be held at Sunset Cemetery at 6:30pm on Wednesday, July 15, 2020.

Michael William Skinner of Shelby entered the presence of his Savior on July 11, 2020, at the age of 61 after a short, but courageous, fight with Glioblastoma. Mike was born in Athens, Ohio, on April 7, 1959, to Samuel and Patricia Skinner.... View Obituary & Service Information

The family of Michael Skinner created this Life Tributes page to make it easy to share your memories.

Michael William Skinner of Shelby entered the presence of his...

Send flowers to the Skinner family.