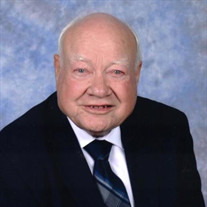 Lewis C. Toney, age 85, of Paducah, formerly of Mooresboro, NC and Benton, KY passed peacefully from this world to meet his heavenly Father on August 29, 2020 after a brief illness. He was a beloved husband, son, father, grandfather, and great grandfather. Lewis was born in Mooresboro, NC to the late Fred and Lois Toney on October 1, 1934 and raised on a cotton farm. He was one of the first from his high school to attend college and graduated from NC State University with a Bachelor of Chemical Engineering in 1957. He later obtained an MBA from West Virginia University in 1978. He worked as a chemical engineer at Union Carbide in Charleston, WV and at Air Products and Chemicals in Calvert City, where he retired in 2000. He loved his family and friends and never met a stranger. He was an avid gardener and loved to give away his vegetables. He was an active member of Lone Oak First Baptist Church. He is survived by his wife of 62 years of marriage, Nadine Edelman Toney of Paducah; his daughter, Janice Toney Schofield (Bart) of Paducah; three sons, Ken Toney (Wanda) of Jacksonville, IL; Dale Toney of Lexington; Steve Toney (Joyce) of Alpharetta, GA; one sister, Jeannie Toney Simmons of New Bern, NC; two brothers, James Toney of Shelby, NC, Harold Toney of Mars Hill, NC; five grandchildren, Jason Toney, Erin Martinez, Ethan Toney, Drew Schofield, Ben Schofield; and four great-grandchildren, Mason Martinez, Cali Martinez, Kiya Martinez and Meadow Martinez. He was preceded in death by his parents and two brothers, Carl Toney and Fred Toney, Jr. A funeral service for Lewis will be held at 3:00 p.m. on Thursday, September 3, 2020 at Lone Oak First Baptist Church with Rev. Bob Martin officiating. Visitation will be held from 5:00 p.m. until 7:30 p.m. on Wednesday, September 2, 2020 at the Lone Oak Chapel of Milner & Orr Funeral Home and from 2:00 p.m. until service time of 3:00 p.m. on Thursday, September 3, 2020 at Lone Oak First Baptist Church. A graveside service will be held at 2:00 p.m. on Sunday, September 6, 2020 at Campfield Memorial Baptist Church at in Ellenboro, NC. Clay-Barnette Funeral Home is in charge of graveside arrangements. Expressions of sympathy may take the form of contributions to: Lone Oak First Baptist Church, 3601 Lone Oak Rd. Paducah, KY 42001. or Shriner’s Hospital for Children, 110 Conn Terrace Lexington, KY 40508.

Lewis C. Toney, age 85, of Paducah, formerly of Mooresboro, NC and Benton, KY passed peacefully from this world to meet his heavenly Father on August 29, 2020 after a brief illness. He was a beloved husband, son, father, grandfather, and great... View Obituary & Service Information

The family of Lewis Toney created this Life Tributes page to make it easy to share your memories.

Send flowers to the Toney family.