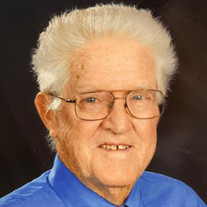 SHELBY: Leon Monroe Ledbetter, 85, of Shelby, NC passed peacefully into the arms of the Jesus, with his wife, children, and grandchildren by his side. Just like he dealt with all life experiences Leon managed his illness with strength and grace and wanted to spend as much time with his loved ones as possible. His final goal on earth was to meet his great grandson Maverick Leon Scott Biddix, which he accomplished. The Lord allowed him four months to get to know Maverick. Leon was a member of Flint Hill Baptist Church for over 70 years and enjoyed his fellowship with his church family. Leon served his country in the Army with the 82nd Airborne stationed at Ft Bragg North Carolina. He also served his community for over 42 years as a member of Shanghai Volunteer Fire Department, and as a member of Shelby Rescue Squad for over 10 years. During his years raising his family Leon exemplified a work ethic by holding numerous jobs. He loved his 80 years of farming, starting on the family farm at a young age, and ending his journey on his own farm driving his John Deere tractors. He also worked at Celanese and Michelin Tire Corporation in addition to numerous part time jobs, setting fence, and pouring concrete to provide for his family. Leon had many interest and hobbies, one being his love of travel. With his wife Trudy by his side, he visited all 50 states, and several foreign countries. He also enjoyed fishing and treasured the many trips to the Outer Banks with family and friends. His love of fishing and farming he passed down to his son Joel and his grandson Josh. Leon married the love of his life, Gertrude Freeman Ledbetter and recently celebrated their 62nd wedding anniversary. Leon was preceded in death by his parents, Joe Rex and Myrtle Harrill Ledbetter, his twin brother Lemuel Ledbetter, and sisters Peggy Parker and Elizabeth Lampe; and grandson Jonathan Ledbetter. In addition to his wife, he leaves to cherish wonderful memories his children Crystal Biddix (Keith), and Joel Ledbetter. He is also survived by grandsons Justin Ledbetter (Tanya) of Winston Salem, Jordan Ledbetter (Jessica), Josh Biddix (Scotti) and great grandsons Mason and Maverick Biddix all of Shelby; his sister Joe Ann Hopkins of Fort Valley, Georgia, in addition to numerous nieces and nephews. A graveside service, with military honor’s, will be held 2pm, Saturday, February 6, 2021 in Cleveland Memorial Park, with the Rev. Keith Dixon officiating. Memorials may be made to Hospice of Cleveland County, 951 Wendover Heights Dr., Shelby, NC 28150. The family would like to thank the hospice staff, Cristal, Donna, Linda, and Michael, for the love and care provided to Leon during his last days on earth. FUNERAL HOME: Arrangements are entrusted to Clay-Barnette Funeral Home & Aquamation Center ONLINE CONDOLENCES: www.claybarnette.com

SHELBY: Leon Monroe Ledbetter, 85, of Shelby, NC passed peacefully into the arms of the Jesus, with his wife, children, and grandchildren by his side. Just like he dealt with all life experiences Leon managed his illness with strength and grace... View Obituary & Service Information

The family of Leon Ledbetter created this Life Tributes page to make it easy to share your memories.

Send flowers to the Ledbetter family.