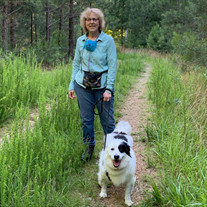 DURHAM, NC – Kathi K. Beratan died peacefully at her home on Sunday, March 21st 2021. She was 64 years old. She is survived by her husband David, and her beloved dog, Bo. Kathi was born in western North Carolina, and grew up in the woods with her four older brothers and parents. She was a varsity student athlete at Chapel Hill (fencing), where she earned bachelor’s and master’s degrees in geology. Her master’s thesis explored peat deposits of a Holocene era swamp near Wilmington, NC and the subject of water and its motion pervaded her career. In her geology training, and in summer jobs, she became a master draftsman in the days when maps were drawn by humans on velum with India ink. Fortunately for David, they met during his first year of graduate studies, at the wedding of their best friends who had tried unsuccessfully to get them together a year earlier. It was either David’s charm or the bust in the oil market that attracted Kathi to join David in southern California, where she first worked as a draftsman at Caltech and then earned her Ph.D. in geology at U.S.C. Her graduate studies were conducted in the Mojave desert, exploring the history of basin development during the Miocene era that is recorded in the desert’s sedimentary rocks. These studies involved navigation and survival in the vast and unforgiving southwestern desert in an age before cell-phone communication. A post-doctoral position at NASA’s Jet Propulsion Laboratory allowed her to bring the power of emerging remote sensing tools to field geology. At JPL, she also served on the science support team for NASA’s Magellan spacecraft mission, which mapped the surface of the planet Venus. Kathi held faculty positions at the University of Pittsburgh and NC State University, where her interests evolved into those of the right here and right now on planet earth in North Carolina. She was passionate about addressing complex societal challenges that require the combination of good science, stakeholder engagement, and political mobilization. In Durham, she had a special enthusiasm for issues surrounding land use, urban watersheds, and social justice. Kathi’s activities included volunteer work on behalf of the groups You Can Vote and the Ellerbe Creek Watershed Association. She also enthusiastically trained her dogs in scent discrimination (nose work). Kathi was engaged in wide ranging creative activities, including pottery, glass blowing, weaving, fabric collage, and luring David away from his books. Contributions in Kathi’s name can be made to You Can Vote (which educates, registers, and mobilizes voters and is creating a fellowship in her honor), Ellerbe Creek Watershed Association (which champions Durham’s urban watershed), and Beyond Fences (which helps make pet ownership accessible and humane Aquamation services preformed by Clay-Barnette Funeral Home and Aquamation Center, at the request of Dr. Beratan.

DURHAM, NC &#8211; Kathi K. Beratan died peacefully at her home on Sunday, March 21st 2021. She was 64 years old. She is survived by her husband David, and her beloved dog, Bo. Kathi was born in western North Carolina, and grew up in the woods... View Obituary & Service Information

The family of Dr. Kathi Beratan created this Life Tributes page to make it easy to share your memories.

Send flowers to the Beratan family.