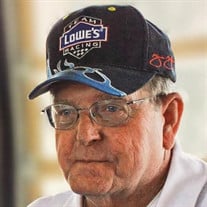 SHELBY: Johnny Fay Tesseneer, 81, died went to his heavenly home Tuesday, September 7, 2021 at Testa Family Hospice House in Kings Mountain. Born in Rutherford County, he was the son of the late Fay and Addie Horn Tesseneer. John was a member of Zoar Baptist Church, where he was a member of the Men’s Friends Sunday Class. He worked as a heavy equipment operator with Burns &Spangler for 25 years, where he was proud of his highway work. He later worked and retired from Kings Mountain Mica Mine. John was an avid Atlanta Braves fan, and he enjoyed NASCAR, college football, John Wayne westerns and music and family. He treasured his 1972 Chevrolet pickup truck that he bought new. John will be remembered for loving the Lord as a simple man, and who was well respected with high moral character. In addition to his parents, he was preceded in death by his sisters, Maude Allison, Doris Champion and Irene Waters. He is survived by his loving wife of 52 years, Kim Cantrell Tesseneer, of the home; son, Mike Tesseneer and wife Michal of Polkville; daughters, Julie McMurry and husband Jimmy of Polkville; Cindy Stroupe of VA and Erin Treharne and husband Dan of Shelby; sister, Laura Biggerstaff of Saluda; grandchildren, Jason and Andy McMurry, Ashley King and Nikki Kay; great grandchildren, Connor, Colton, Payton, Hunter and Lane; many nieces and nephews; and a dear lifelong friend who he considered his brother, Bobby Moore. A private family celebration will be held to honor John’s life. Memorials may be made to Hospice of Cleveland County, Zoar Baptist Church or to the donor’s choice. FUNERAL HOME: Arrangements are entrusted to Clay-Barnette Funeral Home & Aquamation Center

The family of Johnny Tesseneer created this Life Tributes page to make it easy to share your memories.

Send flowers to the Tesseneer family.