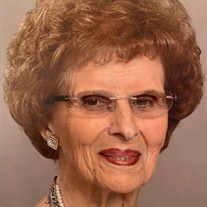 Matrell Fern Bell Crawford (May 31, 1937 – February 23,2022) has passed from this life into the beautiful presence of her Lord and Savior, Jesus Christ. Fern attended Lattimore School until she married in February 1955 of her senior year. She proudly received her high school diploma from Shelby High School through Cleveland Community College in 1981. She was among the first group of employees hired at Union Carbide (later Kemet Electronics) where she worked for many years until she retired. In years past, she enjoyed sewing, bowling, and cooking huge homemade meals for her family. She enjoyed taking care of her friends as she visited, shopped, or cooked for them. She took pleasure in watching soap operas through the week but mostly looked forward to Sundays when she could attend “her church” at Westwood Heights Baptist Church where she treasured her Sunday School class as well as the WAW gatherings. She read her bible daily, reading it cover to cover many times. Her biggest smiles appeared when her grandchildren or great-grandchildren came for a visit. A native of Cleveland County where she lived her entire 84 years, Fern was the daughter of the late Edward Bell and Ethel Hullender Bell. In addition to her parents, she was preceded in death by a son, Bobby Max Crawford; sister, Freida Bell and brothers, Jonas Bell, Lowry Bell, Manuel Bell, and William “Bud” Bell; and her former husband, Max Crawford. She is survived by her daughters, Carla Cody (Ricky) and Freida Ware (the Rev. Dr. John Ware); grandchildren, Ric Cody (Riley) who the family has always teasingly and lovingly accepted as her favorite, Carly Lee (David), Melia Stover (Matt), Ariel Lesmerises (Brent), and Ashby Ware (Kristi); great-grandchildren, Carson and Lilly Lee, Will and Josh Stover, Mackenzie, Sydney, and Nate Lesmerises, and Lindsey, Jake, and Megan Ware; as well as many nieces and nephews. Funeral services for Fern will be held at 1:00pm on Monday, February 28, 2022, at Westwood Heights Baptist Church. The family will receive friends one hour prior to the service at the church. Burial will follow at Cleveland Memorial Park. In lieu of flowers, memorials may be made to Hospice Cleveland County (www.Hospicecares.cc).

Matrell Fern Bell Crawford (May 31, 1937 &#8211; February 23,2022) has passed from this life into the beautiful presence of her Lord and Savior, Jesus Christ. Fern attended Lattimore School until she married in February 1955 of her senior year.... View Obituary & Service Information

The family of Fern Crawford created this Life Tributes page to make it easy to share your memories.

Send flowers to the Crawford family.