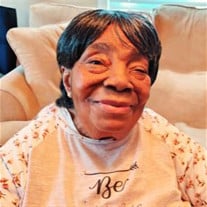 KINGS MOUNTAIN-Edlena Davis, 89, died Saturday, October 3, 2020, at her home. Funeral arrangements are entrusted to Clay-Barnette Funeral Home in Kings Mountain. Her virtual memorial service may be viewed at edlenadavis.com REFLECTIONS Psalm 116:15 --- “Precious in the sight of the LORD is the death of his saints.” Mama, Grandma, Sis., Auntie, and Mother - Edlena Davis - was born a beautiful, vivacious baby girl on February 26, 1931. Little did her parents know that this baby girl of the small town of Muskogee, Oklahoma would be the caregiver of several family members. First, she was in charge of taking care of her paternal grandmother at the tender age of 8 or 9 years old. Then, her mother, Mary Jones Reed became ill and passed when Edlena was 17 years old. Later, she moved to St. Louis, Missouri, and served her Aunt Roxy when her health failed. She was by her side until she took her last breath. In addition, she assisted her sister Delitha Reed Russell when she became sick and helped her raise 12 birth children, including 4 sets of twins. Finally, her father, James Marshall Reed moved to St. Louis to live with her when he had a stroke. She nursed him back to health and he lived with her for 3 years until he passed at 83 years old. On May 29, 1969, she was united in Holy Matrimony to the love of her life Malkiah Davis Jr. and celebrated 42 years of marriage. Through this union, Danyale Charlene Davis was born. Edlena also embraced and raised as her son Darrell T. Dickerson. She was a faithful, loving wife, mother, and homemaker. She also enjoyed babysitting children and taking care of her dogs. Mother Davis received Jesus Christ as her personal Savior at an early age in Muskogee, Oklahoma. In St. Louis, Missouri she joined Friendship Baptist Church under the leadership of Rev. F.K. Trussell. Later, she followed him to All Saints Southern Baptist Church and continued attending when he passed the mantle to Rev. Mack Robinson. She served faithfully in a variety of capacities as a Sunday School & Bible class teacher, usher, food pantry outreach coordinator, Mother Board member, and much more. Whatever she found her hands to do, she did it heartily as unto the Lord. Also, she was a praying woman and actively prayed throughout the day. She loved to read her Bible and recite her favorite scriptures from memory: Psalm 23, John 3:16, and the Lord’s Prayer. One of Mother Davis’ most powerful testimonies is after 18 operations and 12 years of dialysis, she received a kidney transplant. The doctors told her that on average, kidneys from a deceased donor usually last around 10 years. However, immediately after her surgery, she began telling everyone, “God gave me this kidney, and nothing will ever happen to it!” This year her kidney was 27 years old. It never failed, because God does fail!! He is faithful!! Doctors were always amazed each time they evaluated her. We continue to give God praise for all he has done! Although she was a caregiver, she never wanted anyone to take care of her. She would say, “I don’t want to be a burden.” However, she wasn’t a burden. When her legs would no longer function properly, she allowed her daughter, son-in-love, and granddaughter the privilege of loving on her and spending time with her. She relocated to Kings Mountain, NC in November of 2019 and spent a full year being entertained, served, and honored by her loving family. She experienced many celebrations and enjoyed a stunning view of nature. She loved watching the cows and various wildlife and was highly entertained by her granddaughter. This includes playing with slime, watching Perry Mason reruns, manicures and pedicures, etc. She would thank them daily for taking care of her like she took care of so many others. She prayed special blessings over them daily. Before her final transition from this life to eternity, she exclaimed, “Basically everyone I know is already in heaven except me! I am ready to go home.” When she became weak and dehydrated, she refused to eat or drink and was adamant about people not trying to keep her here. She departed peacefully at home early Saturday morning on October 3, 2020, around 1:11 am, surrounded by her loving family and the sounds of praise and worship music. Her parents, husband, siblings- Curtis Reed and, Delitha Russell Reed, pastors, and many others preceded her in death. She leaves to cherish her memory, 2 children - Danyale Patterson (Brandon) Darrell T. Dickerson; 2 grandchildren - Kalia Patterson, Shakena Wallace; One Best friend, Delores Verner, All Saints Southern Baptist Church family, a host of nieces, nephews, and other loving relatives & friends.

The family of Edlena Davis created this Life Tributes page to make it easy to share your memories.

Send flowers to the Davis family.