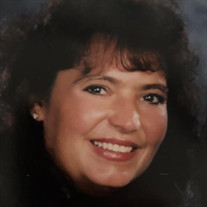 “If you should ever leave me Though life would still go on, believe me The world could show nothing to me So what good would living do me God only knows what I'd be without you” The matriarch of the Hartrum family, Debra Lynn Hartrum, took her last breath in Charlotte, North Carolina on November 12th, 2021. She passed on to the next world peacefully, surrounded by her loving family while listening to her favorite album, Pet Sounds, with Sloop John B. bringing her home to rest. Debbi is survived by her best friend and husband Kerry Hartrum, sons Kris, Dustin, Adam, and Jameson Hartrum, grandsons Max and Woody Hartrum, sisters Pam Ryan, Sondra Cooper-Gullion, and Lynda Zivalich, and father Frank Cooper. She has fourteen nieces and nephews. Preceding her in death is her mother, Frances Cruise and her brothers Charles “Chip” Gordon and Frank Cooper Jr. Debbie was born September 9, 1956, in Würzburg, Germany to Frank Cooper and Francis Bowers. She lived in Lima, Ohio until her family moved to Los Angeles, California. As a child, Debbie was a dancer, gymnast, and beauty queen. After graduating from Burbank High in 1974, she worked as a model and then as a flight attendant for PSA. She met her husband Kerry in a production of Grease at The Manatee Players in Bradenton, Florida in 1982. Kerry was Danny Zuko and Debbie was Cha Cha, the best dancer at St. Bernadette’s. The two fell in love and were quickly married on a beach at Anna Maria Island. After moving the family to Ohio, Debbie attended The College of Wooster, obtaining her BA in Religious Studies. She also received a Master's in Theology from Princeton University and a Master’s in Museum Studies from John Hopkins University. She was a lifelong academic and a voracious reader. She loved film, especially Gone with The Wind, West Side Story, White Christmas, To Kill a Mockingbird, The Graduate, and The Godfather. To say that Debbie’s life was dedicated to her family is an understatement. Everything else was insignificant by comparison. Her family’s well-being was her every waking thought. She raised and educated her four sons, and unofficially adopted many of their friends over the years. She built a meaningful cultural hub at her Marion Street Home in Shelby, North Carolina. For decades, she maintained an intimate meeting place full of food, friends, parties, and the sounds of Frank Sinatra & The Beach Boys. She was well-known for her Italian dinners which were passed on to her by her mother Frances through her Italian American heritage. Vodka rigatoni, spicy meatballs with raisins, stuffed shells, and endless Christmas cookies filled the bellies of many through the years. Debbie loved to argue. If she did not like something, she told you. She was headstrong and outspoken and a powerful, rebellious woman. She did not have a poker face and she was as gullible as they come. Kerry’s jokes drove her up the wall, but you could tell she secretly liked them. Above all else, she was obsessed with her boys, grandsons, sisters, nephews and nieces, Christmas, and musicals. She truly loved her best friend and husband, Kerry. Debbie was the beating heart of the Hartrum family. The connective tissue that held us all together. She was our mama, our sister, and our Nonna. God only knows what we’ll be without you. In Lieu of Flowers, please donate to the Cleveland County Animal Services and adoption. https://www.paypal.com/donate/?cmd=_s-xclick&hosted_button_id=NPPLCYDV5FHKE

&#8220;If you should ever leave me Though life would still go on, believe me The world could show nothing to me So what good would living do me God only knows what I'd be without you&#8221; The matriarch of the Hartrum family, Debra Lynn... View Obituary & Service Information

The family of Debra Hartrum created this Life Tributes page to make it easy to share your memories.

“If you should ever leave me
Though life would still go on, believe...

Send flowers to the Hartrum family.