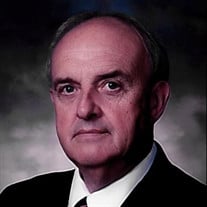 GROVER: Former educator and political activist Dean B. Westmoreland, beloved husband of Carolyn Lee Westmoreland, died Thursday, September 19, 2019, at Testa Family Hospice House in Kings Mountain. Dean was born on November 10, 1935, to the late J. Bert Westmoreland and Vangie Norman Westmoreland in Grover, NC. He attended Grover Elementary and High School graduating in 1953. He entered Lees-McRae College in Banner Elk, NC where he graduated in 1955. He entered Appalachian State University graduating in 1958. Following graduation he entered the US Army. Upon completion of basic training at Fort Jackson in Columbia, SC and Fort Hood in Killeen, Texas, he completed advanced basic training at Fort Sam Houston in San Antonio, Mr. Westmoreland served as a medic in the 24th Engineer Battalion, Second Armored Division in Furth, Germany. Following an honorable discharge from the US Army, Dean began his teaching career in 1961 at Harding High School in the Charlotte-Mecklenburg School System. He transferred to West Mecklenburg High School where he taught for 7 years. In 1968 Dean began a twenty year teaching career at Kings Mountain High School in the Kings Mountain District School System. Mr. Westmoreland was active in the North Carolina Education of Educators, the largest professional organization in North Carolina. He served many years on the NCAE Board of Directors representing this region. He was chairman of the legislative Commission for a number of years and was elected state president in 1976. He held virtually all offices in the local and district units of NCAE. He attended numerous state and national conventions representing the educators of this area. In 1975 Dean was instrumental in the establishment of the NCAE’s Political Action Committee (PACE), the political action arm of NCAE and served two years as its chairman. In 1975 Dean was one of 50 delegates representing North Carolina and the United States at the annual convention of the World Confederation of Organizations of the Teaching Profession held in the Republic of Singapore. A life-long democrat, Dean served as chairman of the Grover Democratic Party Precinct for 20+ years. He was a member of the Cleveland County Democratic Party Executive Committee and was a member of the State Democratic Party Executive Committee for 8+ years. He also served the 10th Congressional District Executive Committee. He held the office of chairman of the Cleveland County Democratic Party for two terms. In 2004 the Democrats of the 37th NC Senatorial District nominated Dean as their candidate for the NC Senate. He was also nominated in 1998 as a candidate for the NC House of Representatives. Mr. Westmoreland’s keen wit, art of the retort and knowledge of local, national and international issues, was evident by his participation as one of the Democrats on the popular locally produced TV show, “Political Smackdown”. Dean especially loved Cleveland County and always answered the call to serve when asked. He served 6 years on the Social Services Board. He was a member of the Board of Trustees of Cleveland Community College. He was chairman of the Cleveland County Board of Elections for five and a half years. Dean served several years on the Board of Directors of the Cleveland County Historical Association. Mr. Westmoreland served on the Grover Town Council for two years. He was a member of the Kings Mountain Consortium for Progress and served as chairman of the subcommittee that was instrumental in bringing Summit Place, an assisted living facility to Kings Mountain. Dean was a member of the Stateline Lodge #375 of AF & AM in Grover. He is survived by his loving wife, Carolyn Lee Westmoreland, of the home. Deans body will lie in repose 11am-3pm, Monday, September 23, 2019, in the chapel of Clay-Barnette Funeral Home in Kings Mountain. Family will not be at the funeral home during those hours. Funeral services will be held 11am, Tuesday, September 24, 2019, at the Episcopal Church of the Redeemer in Shelby, with the Rev. Caroline Kramer officiating. A reception will immediately follow the service, at the church. A private burial will take place in the Grover Cemetery. In lieu of flowers, memorials may be made to the Dean B. and Carolyn L. Westmoreland memorial Scholarship Fund, c/o The Foundation for the Carolinas, 220 North Tryon Street, Charlotte, NC 28202 FUNERAL HOME: Arrangements are entrusted to Clay-Barnette Funeral Home of Kings Mountain

The family of Dean Westmoreland created this Life Tributes page to make it easy to share your memories.

Send flowers to the Westmoreland family.