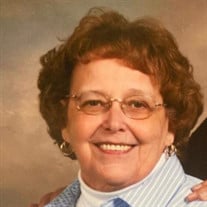 Mooresboro- Carolyn Kay (Whicker)Keener of Mooresboro, North Carolina. Formerly a long time resident of Promise City, Iowa passed away and went home to be with her heavenly Father on March 12, 2022. Carolyn was born June 3,1942 to Clifford B. Whicker and Letha (Foster) Whicker. Joining an older brother Phillip and later joined by another brother Wayne and a sister Barbara Ann. Carolyn grew up and went to school in the Rathbun and Moravia area. She graduated from Moravia High School in 1959. After graduation she worked in Moravia for a short time and then moved to Des Moines, Iowa and was employed at Central Life in the Secretary Pool. February 25, 1966 she married Joseph E. Keener and to this union 2 children were born. Daughter Susan (Keener)Starr and David Keener. Carolyn worked for many years in the Centerville area. Milani and Milani Law. Drake, Wilson and Jay Law. KCOG Radio Station, Grace Tabernacle Baptist Church. Underwood Law, and Verle Norris Law. Carolyn and Joe lived in Promise City for 40 years and were active memebers of the First Baptist Church in Seymour. After retirement they moved to North Carolina to be closer to family and they were both getting tired of the Iowa winters. They were active members of the Cornerstone Baptist Church in Mooresboro. Carolyn enjoyed reading, quiliting and spending time with her friends and family. She prayed for them all every day. She accepted the Lord as here Savior in March 1961, so we know where she is at today and that we will see her again, that is the comfort we have. Cooper, Sadie and Paulie were her special 4-legged friends, she and Paulie spent time watching TV and napping in the recliner. Carolyn’s survivors include her daughter Susan Starr (Kerry) of Centerville, Iowa. Son David Keener of Mooresboro, NC. 5 Grandchildren Zachary Starr of Centerville, IA. Shelby Keener, Emily (Keener) Carlisle (Johnathon) of Lattimore, NC. Jessica Keener of Kingfisher, OK. , and David Keener (Cheyenne) of Wynnewood, OK. And 1 great-grandson, Kaiden Joseph Keener of Lattimore, NC. a Brother Phillip E. Whicker of Moravia, IA. and One Sister-in-law Kitty Whicker of Blackwell, OK. She was preceded in death by her husband of 50 years, Joseph E. Keener. Her parents Clifford B. Whicker and Letha (Foster) Whicker, one brother Wayne Ray Whicker, and her sister Barbara Ann Smith. Funeral Services will be held Monday March 14, 2022 at 6 pm. with family present from 5-6 at the Cornerstone Baptist Church in Mooresboro, NC. A family graveside service will be held at a later date. Internment will be in the Promise City Cemetery in Promise City Iowa. In lieu of flowers the family requests that memorials be made the the Cornerstone Baptist Church in Mooresboro, North Carolina.

Mooresboro- Carolyn Kay (Whicker)Keener of Mooresboro, North Carolina. Formerly a long time resident of Promise City, Iowa passed away and went home to be with her heavenly Father on March 12, 2022. Carolyn was born June 3,1942 to Clifford B.... View Obituary & Service Information

The family of Carolyn Keener created this Life Tributes page to make it easy to share your memories.

Send flowers to the Keener family.