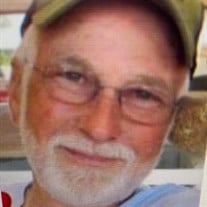 Kings Mountain-Carl Greene Jr, 76, of Kings Mtn. NC, went home to be with his Lord and Savior, Jesus Christ on January 27, 2021. He drew his last breath on earth while being held by his beloved wife, Natalie Lysek Greene and holding the hand of his youngest son, Paul. There is no doubt that he passed into the presence of Jesus who said, “Well done, my good and faithful servant”. He is preceded in death by his step-father, James Snyder, and mother, Gladys Watts Snyder, sisters Mary Helen Sales and Betty Jean Brooks. Mr. Greene leaves behind his two sons, Carl James Greene and Paul Greene (Sandy), and three grandchildren, Madeline Sholtz (Dakota), Nola, and Benjamin, as well as, two great-grandchildren Ava and Alexander. He also leaves behind his sister JoAnn Walker and several nieces and nephews. Carl was devoted to the love of his life Natalie for 56 years. On February 9, the couple would have celebrated 57 years of marriage. The two loved spending time with friends, family and their community. Going to car shows was of special interest to the couple. Carl enjoyed being a founding member of the car club, Mountaineer Cruisers. Carl was a member of Family Worship Center Church of God in Kings Mountain. Carl and Natalie served as leaders of the “Young At Heart” Ministry at their church from 1997 to 2002. From 1997 to 1999, Carl humbly served on the President’s Advisory Council for East Coast Bible College. He was the owner of J&C Machine Shop, from which he retired. In his younger days, he served as Chef of the Volunteer Kings Mtn. Fire Department. In his spare time, Carl greatly enjoyed fishing and hunting with his family. He was a hard worker and loved his family deeply. His grandchildren held a special place in his heart and they never questioned his love for them. He will be greatly missed by all who knew and loved him. A Memorial service will be held 3pm, Sunday, January 31, 2021 at Clay-Barnette Funeral Home of Kings Mountain. The family will receive friends one hour prior to the service in the funeral home.

Kings Mountain-Carl Greene Jr, 76, of Kings Mtn. NC, went home to be with his Lord and Savior, Jesus Christ on January 27, 2021. He drew his last breath on earth while being held by his beloved wife, Natalie Lysek Greene and holding the hand... View Obituary & Service Information

The family of Carl Greene Jr. created this Life Tributes page to make it easy to share your memories.

Send flowers to the Greene family.