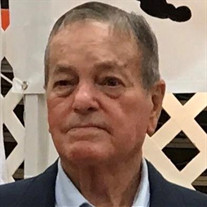 SHELBY-Nelson Bradley Thompson (Buddy), age 82, died Monday, December 16, 2019. Born in Johnson City, TN on January 8, 1937, he was the son of the late Jack Taylor Thompson and Sallie Kate Shepherd Thompson. Buddy loved watching ball games, and would often reminisce on his own high school football career. His success as a left-handed quarterback led to one of his proudest moments, his induction in to the Elizabethton High School Sports Hall of Fame. Along with his love of family and sports, his other great love was his family farm in Watauga, TN. While he was at the farm, he could often be found on the back of a tractor or in his favorite swing which overlooked the pastures of the farm. Buddy had two favorite times of year, first cutting and second cutting of hay season. Buddy is survived by his longtime partner, Rosemary Armour, four sons, Bradley (Amanda), Mark (Page), Brian (Susan), John Michael (Patti), along with nine grandchildren, two great grandchildren and sister, Annas Thompson Clark. Buddy gained an amazing bonus family when he met Rosemary, and he loved her family as his own. Buddy was larger than life. He loved to be surrounded by family and friends. He considered many friends as family. He was one of a kind and will be greatly missed. The family will receive friends Saturday, December 21, from 5-7 pm at Clay Barnette Funeral Home, 1401 W. Dixon Blvd., Shelby, NC 28152. Burial will be Sunday, December 22, 1 pm at the Thompson Family Cemetery, Watauga, TN. In lieu of flowers, memorials may be sent to Elizabethton High School, Attn: Athletic Department, 907 Jason Witten Way, Elizabethton, TN 37643. FUNERAL HOME-Funeral arrangements are entrusted to Clay-Barnette Funeral Home & Aquamation Center in Shelby. Online condolences at www.claybarnette.com

The family of Bud Thompson created this Life Tributes page to make it easy to share your memories.

Send flowers to the Thompson family.