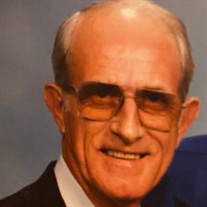 SHELBY: William Joel Williams (Billy) reached out to take the hand of Jesus early Wednesday morning, April 28, 2021, at the home of his daughter, Deborah Williams Wall, and her husband Frank Wall, Jr. Born June 14, 1930, to W. Alvin Williams and Dova Walker, Billy overcame Depression-era difficulties and faced his long life with determination, pride, and love for his Lord, his church, his beautiful wife, the former Grace Parker, and his family. Billy’s mother passed away when he was a toddler, and he was blessed with a special angel, his second mother, the former Gertrude Fortenberry. Bill was preceded in death by three children: Ronald, Donald, and Joel; three sisters: Beatrice Hicks, Catherine Kimbrell, and Elizabeth Sasaki; and a special cousin, Aileen Ridgeway. He is survived by two grandchildren: Holly Wall Poynter (Matt) and Gabriel Dean Wall (Debbie) and by five great-grandchildren: Aiden Tucker, Dylan Tucker, Reagan Poynter, Rylin Poynter, and Cameron Wall. He is further survived by brother-in-law B. H. Parker, Jr. (Jo) and numerous cousins, nieces, and nephews. Billy graduated from Mooresboro High School and Howards Business College. He was a lifelong member of Sandy Plains Baptist Church, where he served as a former deacon chairman, Sunday School teacher, chairman of the Long-range planning committee, and on numerous other committees. He was the Past-Master of Friendship Lodge #388, a 32 degree Scottish Rite Mason, and an Oasis Shriner. He was a past-president of the Boiling Springs Rotary and was a Paul Harris Fellow with twenty-six years of perfect attendance. He proudly served as a trustee of Chowan College and Gardner-Webb University and co-owned Harrill Chemical and Paper Supply Company and also B &W Mtg Com. He was a cattle farmer and business consultant to others and found time to serve eight years on the CCSD Board of Commissioners, help establish the original Economic Development Committee, and help people and his community. Billy loved his community and church and was a friend to all; but most of all, he loved his Lord and is rejoicing now in his new life in heaven. Billy will be interred graveside at Sandy Plains on Saturday, May 1, at 11:00 AM. The family will receive friends casually on the church grounds both before and after the service. Memorials may be made to the church, Parkinson’s research, or to Hospice of Cleveland County. The family would like to thank two special Hospice caretakers: Joanie and Donna; two special ladies who tended to him: Shannon Whatley and Tammy Greene; and all his visitors and people who prayed for him. He was truly a blessed man. FUNERAL HOME: Arrangements are entrusted to Clay-Barnette Funeral Home & Aquamation Center

The family of Billy Williams created this Life Tributes page to make it easy to share your memories.

SHELBY: William Joel Williams (Billy) reached out to take the...

Send flowers to the Williams family.